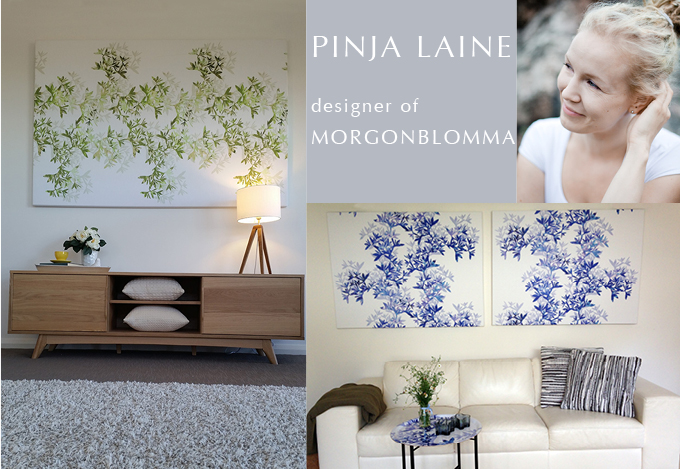 Pinja Laine is one of our Finnish textile designers. When Alex last was in touch with her she asked a few questions about her design work.

Alex:
“When did you start to get interested in design?“

Pinja:
“In my childhood I lived a few years on the countryside, that's where my creativity got its first steps. Already in college I knew that the only thing I wanted to do as a professional was to work in the field of design. Now I live my dream and work as a designer in two companies: Studio Kelkka, where I have nine other creative persons working with me, and in my own design office, Soul Design.”

Alex:
“Elle and I love MORGONBLOMMA and we think it looks Japanese. What was your inspiration behind it?”

Pinja:
“When designing MORGONBLOMMA (Morning Flower) I was inspired by light and shades; I wanted to capture the feeling of a misty morning, when you are walking in the woods and the sun is rising up slowly. That's when you can feel your soul is relaxed and I think that's where the Japanese sense of design comes from.”

Alex:
“Who is your favourite Scandinavian designer?”

Pinja:
“I admire every designer who works with passion and soul. But if I have to name one, it would be the Finnish designer Eero Aarnio. This ”designs grand old man” hasn't lost his fun and joyful touch over the decades of work, and that is something I respect. I hope that some day I can look back and say the same!”

At the moment Pinja is working on a new design collection that will be launched at the Frankfurt Heimtextil Fair in January 2015.